The Israeli occupation courts have, once again, extended the isolation of Ahmad Sa'adat. On May 3, 2011, at a hearing in Beersheba prison, the court issued an extended isolation order until November 3, 2011. Ahmad Sa'adat, General Secretary of the Popular Front for the Liberation of Palestine and Palestinian national leader, has been held in isolation since March 19, 2009 - for over two full years, over 775 days.

It is well-established that solitary confinement and isolation are dangerous and detrimental to the physical and mental health of prisoners. It is a technique frequently used against political prisoners, from the U.S.'s Guantanamo Bay and Communications Management Units, to Ben Ali's isolation cells in Tunisia, to the prisons of the occupation. Israel is a signatory to the International Covenant on Civil and Political Rights, whose articles 10 states that "All persons deprived of their liberty shall be treated with humanity and with respect for the inherent dignity of the human person." On the contrary, isolation cells deprive prisoners of human contact, recreation, and mental stimulation. Sa'adat is regularly denied family visits, newspapers, books, and information in Arabic. While Israel's utter contempt for international law is visible in every aspect of its behaviour, from its war crimes against Palestinians, to its denial of the Palestinian right to return, to its apartheid regime targeting Palestinian citizens, the situation of Palestinian prisoners is a glaring example of Israel's flouting of international law and human rights standards.

The European Committee for the Prevention of Torture and Inhuman or Degrading Treatment or Punishment (CPT) - the expert body associated with the Council of Europe - has noted, "It is generally acknowledged that all forms of solitary confinement without appropriate mental and physical stimulation are likely, in the long-term, to have damaging effects resulting in deterioration of mental faculties and social abilities." Those prisoners targeted for isolation, including Ahmad Sa'adat, are long-time Palestinian leaders. Sa'adat has always been a leader among his fellow prisoners and a voice of conscience of the Palestinian people - and it is for that reason that he is being targeted under cover of secret evidence for isolation and deprivation.

Sa'adat refused to attend the hearing, as an illegal manifestation of an illegitimate occupation and abduction, and due to its reliance on secret evidence, saying that he refused to legitimize what was clearly a mockery of justice.

From administrative detention, to military trials, to the isolation cells, Israel shows utter contempt for the human rights and dignity of Palestinian prisoners. In response, it is urgent that supporters of Palestine and justice around the world raise their voices to demand an end to isolation, an end to arbitrary detention - and the freedom of Ahmad Sa'adat and every one of the thousands of Palestinian prisoners of freedom, in an occupation's jails for daring to struggle for the freedom of their land and people.

We urge activists to include statements and messages of solidarity with Palestinian prisoners in their events, and as the anniversary of Al-Nakba comes near, to mark the Nakba on May 15 by demanding the right to return and the liberation of Palestine -including the freedom of Palestinian political prisoners. Palestinian prisoners are hunger striking and raising their voices behind bars - we must join their voices and demand their freedom!
Posted by Workers Party NZ - PFLP Solidarity at 1:55 AM No comments:
Email ThisBlogThis!Share to TwitterShare to FacebookShare to Pinterest 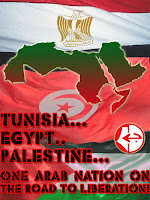 The PFLP is firmly convinced that the Egyptian people's struggle is not only justi, it is powerful, and it will bring defeat to this regime and send a harbinger of defeat to all Arab regimes which prey on our people while obeying U.S. and Zionist dictates. Israel and the U.S. are openly displaying their weakness and fear in the face of the popular movement of the Egyptian people, whose rise has always been a symbol of the rise of the Arab nation, and freedom from subservience, colonialism and fear. The Egyptian people are on a great and historic march toward victory for Egypt, for the Arab nation, and for Palestine. Glory to the Egyptian Intifada!
Posted by Workers Party NZ - PFLP Solidarity at 11:12 PM No comments:
Email ThisBlogThis!Share to TwitterShare to FacebookShare to Pinterest
Older Posts Home
Subscribe to: Posts (Atom)