On August the 20th this year David Rovics and Don Franks will be performing at Bentley's Bar at Canterbury University. Presented by the Workers Party on campus and in conjunction with the PFLP Solidarity Campaign the gig is being used as to benefit the cause of Palestinian Liberation. The venue is limited to 150 people so get in quick!

"The criminalization of the PFLP and other organizations by various governments is sheer hypocrisy.  These same governments are signatories to UN conventions that make it clear -- the PFLP and the Palestinian people generally are not criminals.  They are resisting a criminal occupation -- it is the militaristic, apartheid state of Israel which is the criminal here, which needs to be treated as such, not the PFLP." - David Rovics, singer-songwriter

David Rovics - "All aboard the Mavi Marmara" 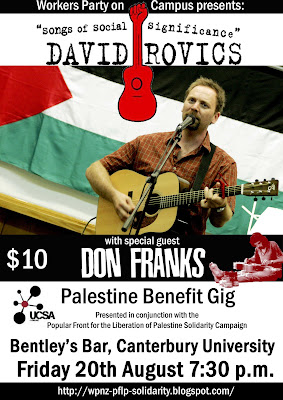 "David Rovics grew up in a family of classical musicians in Wilton, Connecticut, and became a fan of populist regimes early on. By the early 90's he was a full-time busker in the Boston subways and by the mid-90's he was traveling the world as a professional flat-picking rabble-rouser. These days David lives with his family in Portland, Oregon and tours regularly on four continents, playing for audiences large and small at cafes, pubs, universities, churches, union halls and protest rallies. He has shared the stage with a veritable of who's who of the left in two dozen countries, and has had his music featured on Democracy Now!, BBC, Al-Jazeera and other networks. His essays are published regularly on CounterPunch elsewhere, and the 200+ songs he makes available for free on the web have been downloaded more than a million times. Most importantly, he's really good. He will make you laugh, he will make you cry, he will make the revolution irresistible."