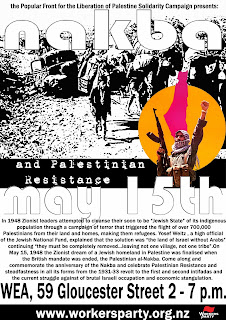 Posted by Workers Party NZ - PFLP Solidarity at 2:14 AM 8 comments:
Email ThisBlogThis!Share to TwitterShare to FacebookShare to Pinterest

The majority of the money has been raised through the sale of “Resistance is not Terrorism” t-shirts throughout the country. A new t-shirt is being designed featuring Leila Khaled, PFLP activist and resistance fighter, and will be released at a nationwide launch on the anniversary of the creation of the Zionist state of Israel, known by Palestinians as the “Nakba”, or catastrophe, on May 15th.

The campaign opposes the re-establishment of an Israeli embassy or any diplomatic relations with the Zionist state and deplores a recent announcement by Murray McCully, that a Working Holiday Scheme will “deepen our tourism and education links, and over time contribute to growth in our bilateral commercial, trade and investment links” with Israel. Campaign co-ordinator Mike Walker stated that “instead of extending diplomatic ties with Israel we should be cutting them altogether, following the examples of Venezuela and Bolivia”

The campaign seeks to challenge the political paradigm that allows legitimate National Liberation movements to be labelled as terrorist organisations, and the undemocratic way in which terrorist laws are administered. Prime Minister John Key recently added organisations to the ‘terrorist list’ in New Zealand, with no consultation, justifying it by stating they engaged in “terrorist acts including the indiscriminate killing of civilians and assassination of political leaders.” This statement lacks any credibility when New Zealand’s government seeks to strengthen links with the state of Israel that targets and kills political leaders, trade unionists, writers, cultural exemplars, community activists, local leaders, and student organisers while waging an economic and military war against a civilian population that has been under the tyranny of the longest running illegal military occupation in recent history.

Walker stated that by funding the Palestinian Resistance movement directly “people in New Zealand can stand in solidarity with the Palestinian people and their resistance, however that manifests itself”, while supporting the PFLP “and its vision of a single secular state in all of Palestine, where all people regardless of race, gender or religious beliefs have equal rights.”
Posted by Workers Party NZ - PFLP Solidarity at 12:33 AM 3 comments:
Email ThisBlogThis!Share to TwitterShare to FacebookShare to Pinterest
Newer Posts Older Posts Home
Subscribe to: Posts (Atom)