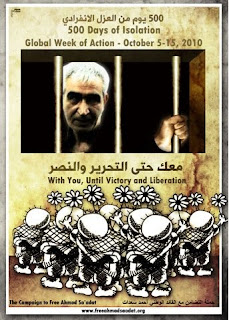 Below is the text of a letter sent to Ahmad Sa'adat, imprisoned leader of the Popular Front for the Liberation of Palestine.

The Workers Party of New Zealand condemns the continued isolation of Ahmad Sa’adat, general secretary of the Popular Front for the Liberation of Palestine (PFLP), and his conviction by an Israeli military court on spurious terrorist charges.

The Workers Party (NZ) sends it warmest greetings to Comrade Sa’adat and expresses its solidarity with him as he endures an extended term of isolation. We condemn the arrest and detainment of Palestinian National leaders and all Palestinian political prisoners and further, condemn the punitive punishment handed out to Comrade Sa’adat for his attempts to organise prisoners in Zionist jails.

We acknowledge the courageous leadership provided by the PFLP for over 40 years in the struggle to liberate and establish a free democratic secular and socialist Palestine.

We call for the release of Ahmad Sa’adat, all Palestinian political prisoners, and the removal of the PFLP as a designated ‘terrorist organisation’ from terrorist lists around the world.