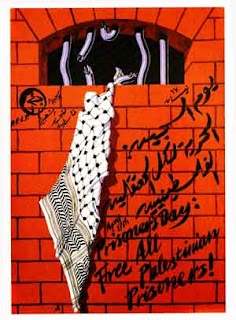 In yet another outrage and attack upon the humanity of Palestinian prisoners and the Palestinian people, Ahmad Sa'adat was sentenced to an additional six months in isolation inside Israeli prisons, an extension that will last until April 21, 2011. 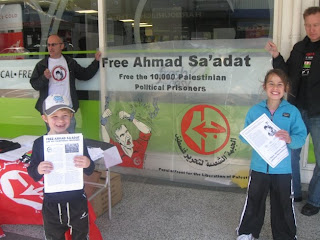 PFLP Solidarity Campaign members in Lyttelton (NZ) during the international days of action in support of Ahmad Sa'adat
Posted by Workers Party NZ - PFLP Solidarity at 1:24 AM No comments:
Email ThisBlogThis!Share to TwitterShare to FacebookShare to Pinterest 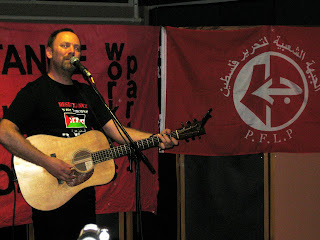 The Popular Front for the Liberation of Palestine solidarity campaign held a benefit gig at Canterbury University on Friday August the 20th. The gig featured David Rovics from the United States and Don Franks from Wellington.

Don Franks, a Workers Party activist, opened the gig and performed songs about the class struggle in New Zealand. “One more Thursday in Black” tells the story of Louise Nicholls and every victim of Police rape, with the chorus “in closing the law showed who it works for”.

Don finished a great set with a song written about the 2001 Police ‘Terror Raids’ in New Zealand. Detailing the polices brutal raid of the Ruatoki and the arrest of activists from around the country it was summed up with the line “Safer communities together, Yeah fuckin right!”.

David Rovics then took to the stage, sporting a ‘Resistance is not Terrorism’ t-shirt, and performed a mix of poetry, storytelling and politically inspired music that kept the audience captivated throughout.

There was a campaign stall at the gig selling both ‘Resistance is not Terrorism’ and Leila Khaled t-shirts, Palestine pamphlets, PFLP Badges and the Spark (the monthly paper of the Workers Party (NZ)).

More video can be found here

David Rovics - "All aboard the Mavi Marmara"

Posted by Workers Party NZ - PFLP Solidarity at 3:22 PM No comments:
Email ThisBlogThis!Share to TwitterShare to FacebookShare to Pinterest 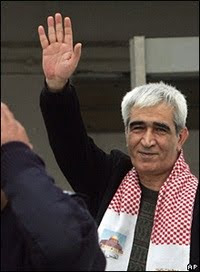 "This is your court and you possess the force to celebrate the trial and convict me on the basis of your lists of accusations, the public one and the secret one, and you can dictate a sentence prepared by the political and security apparatuses that are behind this trial. But I too possess a will obtained from the justice of our cause and the determination of our people to reject any decision from this ‘kangaroo court'..." -Ahmad Sa'adat

Currently there are over 10,000 Palestinian political prisoners being held in Israeli jails. This number is increasing daily as IDF Military Incursions and searches in the West Bank total over 500 separate incidents and 300 arrests each month, mainly targeting political ideology. This is not an unusual part of Palestinian political life and has been a crucial part of the Zionist strategy to eliminate political opposition to the state of Israel. An example of this can be seen when examining the political life of the current General Secretary of the Popular Front for the Liberation of Palestine (PFLP); Ahmad Sa’adat. Between the years of 1967, when Sa’adat joined the PFLP led Palestine Student Union, to 2002 when he was abducted by the IDF from a jail in Jericho, Sa’adat had been arrested 9 times and jailed for close to ten years for his involvement in the PFLP.

Ahmad Sa‘adat, General Secretary of the PFLP, was arrested again on the 15th of January 2002 by the Palestinian General Intelligence Service. He was then transferred to Force 17 (the Palestinian Presidential bodyguard), and held after that in President Arafat’s compound in connection with the killing of the Israeli Minister of Tourism, Rehavam Ze‘evi, on 17 October 2001. The PFLP claimed responsibility for the killing, although Ahmad Sa‘adat was not formally charged with any recognisable criminal offence. This assassination was a response to the killing of Abu Ali Mustafa, General Secretary of the PFLP, who was killed in a targeted assassination by two rockets fired from an Israeli helicopter as he sat at his desk in Ramallah on August 27, 2001.
A petition was presented to the Palestinian High Court of Justice in Gaza calling for the immediate release of Ahmad Sa‘adat. This caused the High Court of Justice to request that the PA General Intelligence Service bring evidence against him. The Intelligence Service failed to do so and on the 3rd of June 2002 the High Court ordered the immediate release of Ahmad Sa‘adat as he had never been charged or brought before a judge.

“Following the decision of the Palestinian High Court of Justice in Gaza ordering that Ahmad Sa‘adat be released immediately, Amnesty International is calling on the Palestinian Authority (PA) to respect this decision and free him from detention without further delay. Amnesty International is also calling on Israel to publicly guarantee that Ahmad Sa‘adat will not be subjected to any extrajudicial measures, including assassination.

The United Kingdom (UK) and the United States (US) must also ensure that the PA and Israel respect Ahmad Sa‘adat’s rights. Both countries were involved in concluding the agreement whereby Ahmad Sa‘adat was being kept in detention, and are providing a team of observers who are monitoring his detention.” – Amnesty International

The Palestinian Authority insisted that it was keeping Ahmad Sa’adat for his own safety after a statement by Ra‘anan Gissin, an Israeli government spokesperson, warning that if "he is not brought to justice, we will bring justice to him. You can’t let murderers free." It is widely believed that Yasser Arafat sold out Sa’adat, in exchange for an end to a month long IDF siege of his own compound, and agreed to transfer him to a Jericho prison where he was to be guarded by British and American soldiers. While in prison in Jericho with no charges or evidence levelled against him, Sa’adat’s younger brother Muhammed Sa'adat, was assassinated by Israeli special forces and his wife arrested when attempting to travel to a conference she was scheduled to speak at outside of Palestine. In March 2006 fearing his imminent release Sa’adat was abducted, along with other prisoners, by the IDF and taken to Israel to stand trial. This followed the sudden withdrawal of American and British monitors, that where guarding Sa’adat, arising suspicion that America and Britain where once again conspiring with Israel.

An Israeli military court found Sa’adat guilty of heading “an illegal terrorist organisation” and sentenced him to 30 years imprisonment. The PFLP slammed the verdict; "When the Israelis arrested him, they accused him of having killed Zeevi, but this accusation did not appear in the sentencing which proves that his arrest was political and was not related to security issues.", along with the Palestinian President Mahmoud Abbas, who called the court's decision "unfair" and "not legally justified." Ahmad Sa’adat is the General Secretary of a legitimate political and military organisation who received approx 40,000 votes in 2006 making them the third largest party behind Fatah and HAMAS. The PFLP holds 50 seats on city councils and is the largest party in the governing city of Ramallah, while also currently holding the mayors office in Bethlehem. Since the 1980’s the PFLP has been active in building popular organisations in the fields of health, women’s rights, agriculture and the workers union movement.

The PFLP rejects Imperialisms two state solution that would limit a Palestinian state to less than 20 percent of the land mandated by the British in 1947. George Habash, the founder of the PFLP, vehemently opposed the American lead peace process that started in Madrid and culminated in the Oslo accords, which caused major rifts in the PLO and lead to the PFLP withdrawal from the organisation, albeit temporarily. Ahmad Sa’adat opposed the new “Road Map” for peace proposed by the Quartet from his prison cell, on the grounds that it is designed solely to provide security for Israel's occupation and criminalise opposition to it as terrorism. For Sa’adat and the PFLP today, any resolution is tied to the right of return of Palestinian refugees that where forced from their land during the Nakba (Catastrophe), and an eventual single secular democratic state where all people regardless of race or religion have equal rights. The PFLP’s continuing military struggle and its associated political ideologies threaten the very existence of the inherently racist Israeli state and Imperialisms grip on the Middle East. The labelling of the PFLP as a “terrorist organisation”, by Israel and other Western state’s, is nothing but an attempt to vilify Palestinian resistance, imprison its leaders and provide justification for Western intervention.

The Campaign to free Ahmad Sa’adat

http://www.freeahmadsaadat.org/
Posted by Workers Party NZ - PFLP Solidarity at 12:25 PM No comments:
Email ThisBlogThis!Share to TwitterShare to FacebookShare to Pinterest

Free Ahmad Saadat Leaflet
Posted by Workers Party NZ - PFLP Solidarity at 1:01 AM No comments:
Email ThisBlogThis!Share to TwitterShare to FacebookShare to Pinterest 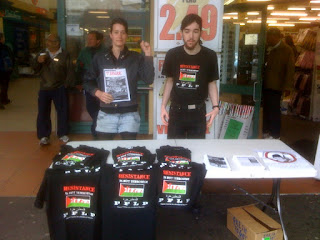 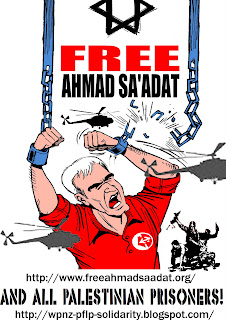 The PFLP Solidarity Campaign is taking to the streets this October in Christchurch, Auckland, Hamilton, Wellington and Dunedin in support of Ahmad Sa'adat, the imprisoned General Secretary of the PFLP.

There will be street stalls, where we will be selling 'Resistance is not Terrorism' t-shirts, film screenings and pickets around the country.

If you would like to get involved in any of the above centers drop us an e-mail at wpnz.pflp.solidarity@gmail.com
Posted by Workers Party NZ - PFLP Solidarity at 12:21 AM No comments:
Email ThisBlogThis!Share to TwitterShare to FacebookShare to Pinterest